Joe was an young boy. He was the favorite son for his father. His father always got him the best dress available in the market. Life was straight and smooth for him. Straight and smooth until he had a dream. His dream was that he would some day become a great ruler or a king. He was very excited. He started telling his brothers about his dream in his life. No one encouraged him. Not even one. Instead they started to hate him. As he sat in the dinning table, some one whispered, here is the great dreamer. Everyone got a good laugh at his cost. His great dreams in life helped him turn his brother into his enemies. One day as he was taking food for his brothers, who were tending the sheep at a distance place, Joe didn't know that his straight life was going to end. His brothers, put him in a pit. There was a turn in his life. Sometimes in order to reach the destination, life takes its own twist and turns. His only way of seeing the light, was seeing upwards. He thought he is going to die in the pit. So he sat at the corner of the pit. But suddenly he was reminded of his dream. He thought to himself this is not the way life ends for me. Though he found nothing in common with where he wanted to be and where he was now, he said to himself, this is not the end. His dream started to give him hope. Sometimes in life, when we feel like we are in a pit, and life seems to have come like a hurricane upon us, the only thing that sustains us is a promise or a dream that we have. No matter even if no one encourages us, our dream starts to carry us. We need to have dreams and vision in our life. Suddenly Joe found a rope coming down the pit. The very brothers who put him in a pit, as they saw a group of travelers, thought, let us make use of him and have some money. Here comes another turn in his life. From pit to be come a slave.
Now, wait a minute, did he not dream of becoming a king. Yes of course. But look where he was now. It seemed that he was heading exactly in the opposite direction. Thats how life is sometimes. But Joe, knew God was in control. Though it seemed, they used him and got money, God used them and brought Joe, a step closer to his dream. He uses your enemies to help you achieve your goal in life. So now Joe was in Egypt. There came the next turn in his life.

He was sold to a officer in Egypt. He was a bit comfortable there. Though he missed his home and his family, he was sincere in his work. He started to gain confidence and everything at last seemed to fall in place. His master saw his sincere work and promoted him to position next to him. Joe was happy. He thought he was “settled”. But his mater's wife thought otherwise. She was nagging Joe to cross the limit. But Joe's answer was “How can I do this against God”. Against Who? Not his master, not his tradition. His baseline for not sinning was God. Unfortunately he was not appreciated for his integrity. Instead he was sent to prison with false accusation. So here came the next turn of his life. When he thought his life came together, all hell broke lose. Remember his dream was to become a king. But now he was in the prison. May be God Thought the best way to enter the palace is through the prison. God has his own way of doing things.
Now I visualize Joe as the most depressed person on earth. He had great dreams but now he must have thought he was nowhere near it. Actually he was so close than ever. From pit to Portipar's home to prison. But Joe was not downcast. He started being sincere in prison. Sincere in prison?? Sincere as a King seems to suit Joe's Dream. But Sincere in prison. Isn't it Bizarre?? No matter where he was Joe was Sincere. You never heard him grumble or complaint in the pit or as a slave or now in prison. He could have said, when I get to the throne i'll work hard. No. He was sincere in a prison. There in prison he was promoted. When you are sincere and when the Lord is with you, even if you are in prison you will be promoted. One of his friend whom he had helped by interpreting his dream, was released. So Joe, told him to make arrangements to get him out by speaking to the King. But his friend forgot him. An unthankful friend didnt make Joe be unthankful to God. He waited. He worked hard. Until the KING got a dream. He was confused. (Throughout this story I see dreams bringing confusion :)) Joe interprets for the king. The king is stunned and he makes him ruler over Egypt. At last his dream is fulfilled. His final turn in life brought him to his destination. Pit, Slave, Prison and Palace was his path. Through twist and turns in his life Joseph at last came to the reality of his dream. It is easier to go straight in life, but twist and turns are essential to reach destination. Do we have great dreams for our life? Desires that seem impossible. Does your situation seem tough and trying? Don't be discouraged? The ONE who gives great Dreams and Desires will Direct you to your Destination in life by His Divine Grace.
at November 11, 2009 No comments: Links to this post

Email ThisBlogThis!Share to TwitterShare to FacebookShare to Pinterest
Labels: Personal 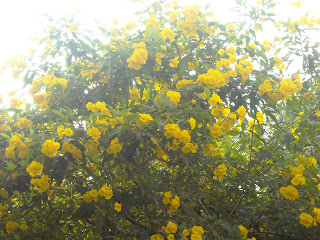 This is a tree near my house. Its a great reminder of HIS Divine Providence.
Look at the lilies of the field and how they grow. They don’t work or make their clothing, 29 yet Solomon in all his glory was not dressed as beautifully as they are. Mathew 6:28