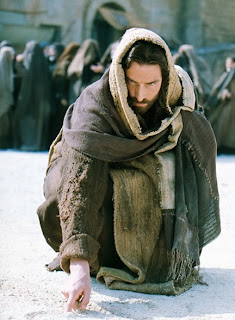 I was caught, caught alive to be dead.
Caught in the very act of adultery and dragged
Dragged in to the presence of Jesus
Dragged while Jesus was teaching to a crowd
I do not know what the lesson was about
May be it was about Living Waters
I was thirsty
I stared at the sand, as my accusers were staring at Jesus
Jesus looked up

One shouted, she was caught in the very act of sin
Law says we should stone her to death
What do you say we should do?

I heard the sound of stones hit the ground
I knew that those words hit their heart
I heard the feet moving
I heard a feeble murmuring
They set the trap in which they were trapped
They began to leave
From old to young
Then there was silence
Jesus still writing on the sand
I looked back and saw I was alone with Jesus
Jesus was still silent
My heart began to be still
Still enough to hear his words
And I heard his words
“Woman, where are they? Has no one condemned you?”
For the first time my eyes met His
“No one” I said.
“Then neither do I condemn you,” Jesus declared. “Go now and leave your life of sin.”
I knew he was God
And I knew he forgave me


God had a plan for Abraham and Sarah. It was a plan that would not only change them but the entire human community for ever. As God seemed to work very slowly, they got impatient. Then, they prepared a plan to fulfill God’s plan. The plan was having a child through Hagar, the slave.
This plan was both legal (in those days) and successful (Hagar gave birth to a son). But still it was not God’s plan for them.