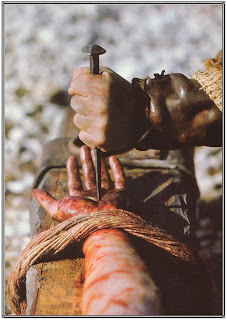 We all want to be known by our achievements. We showcase our certificates and medals for others to known how great we are. But we hide our wounds from others. As I read John, the penultimate chapter, I see this pattern revised. As Jesus entered the room filled with disciples after the resurrection, there was Thomas. Thomas doubted whether it was really Jesus.

So When Jesus appeared the second time and in John 20 verse 26 he says to Thomas “Put your finger here; see my hands. Reach out your hand and put it into my side. Stop doubting and believe.” He was saying, Thomas do you want to know that it’s really me, then touch my wounds. It’s interesting to know that Jesus identifies himself with the wounds. As we are used to see in the Jesus movie, after the resurrection Jesus has a glow around his body. I think it’s was not like that. Jesus had to show his wounds for them to believe.

Do you remember the other time when two disciples where walking down the road to Emmaus and Jesus joins them? Well, those two disciples where not able to recognize Jesus the whole time as Jesus was explaining the scriptures to them. (You see they don’t say, hey I see a glow around him, He is Jesus)

In Luke 24:30 we read, “When he was at the table with them, he took bread, gave thanks, broke it and began to give it to them.” Its then they recognized him. What’s interesting to me is that (And you don’t have to believe me, and it’s what I image would have happened) as he broke the bread and gave them they recognized Jesus. As he gave them the bread, they might have seen the nail print in the hands. May be that’s what made them realize that it was Jesus. That’s what I would like to believe.

Anyway my point here is that even after resurrections, Jesus identified with his wounds. There were no great power display shows standing on top of the temple. He met his disciples and showed his wounds and healed their wounds of guilt, fear, and doubt. His wounds were the sign that he was faithful to God.

Many times I hear people show their blessing and say since I was faithful God has blessed me. But Jesus shows his wounds and says I was faithful to God and to you. Do you have wounds for being faithful for God? Okay I may not have been clear. I was just thinking all these and am putting all these so that you would think about this Jesus and his wounds. I can assure you it can transform you. Share what you learn about Jesus and his wounds these days…I would be grateful..
at April 08, 2011

Email ThisBlogThis!Share to TwitterShare to FacebookShare to Pinterest
Labels: Jesus